Today, space frame systems are widely used all over the world thanks to their various advantages. Space systems are one of the most suitable prefabricated systems that allow architects to apply different forms to buildings.

The design, project, manufacturing, and assembly works of the “Bursa Zoo Waterfowl Cage”, which is made of a single-walled prefabricated steel space frame system and shaped like an elliptical-based dome, will be explained. The project, fabrication and assembly works were carried out by USKON. 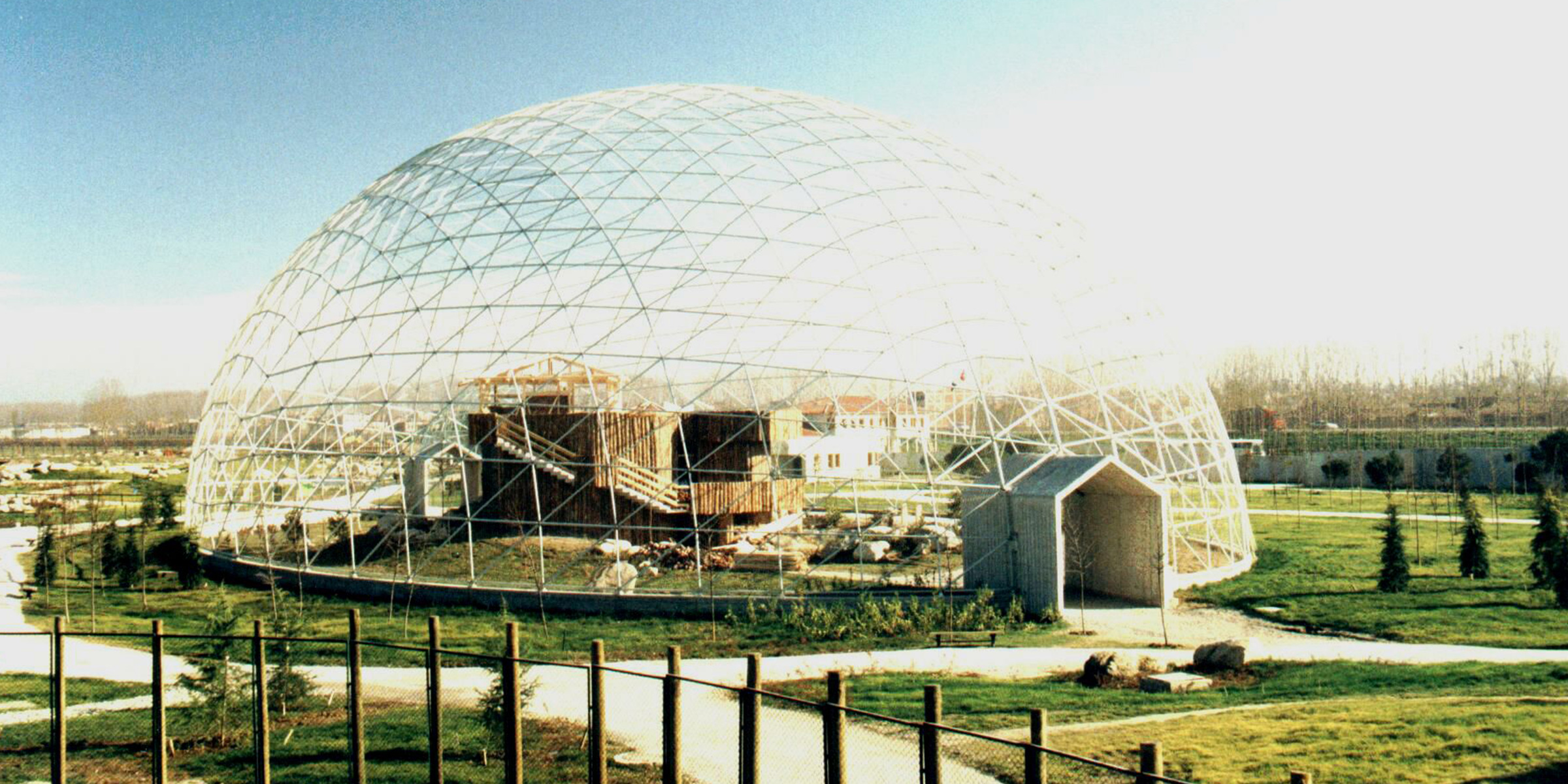 Bursa Metropolitan Municipality has decided to build a zoo on an area of 250,000 m2 in Soğanlıköy, opposite the Botanical Park. After the research done, the animal structure, quantity and space program related to the project were realized with the participation of experts from the European Zoo Association. Today’s zoo and its philosophy have changed a lot compared to the past. It is at the forefront to ensure that the environment and nutrition patterns of animals are provided in an environment that is completely suitable for nature. From this point of view, the size of the spaces and the condition that the structural elements come after nature in a simpler way have been considered as issues to be resolved.

It is planned to include trees at a height of 10 – 18 m, a stream, and a mill to provide the surrounding atmosphere in the Water Birds Open Shelter, which is a part of the project. The bush type was designed to be a place where various kinds of birds can move freely in nature, which is adorned with low plants and flowers, where people also visit to watch birds and nature. In addition, a space was planned with a single-walled space system construction on which a fishing net made of nylon 66 with a loop size of 5 x 5 cm.

While choosing the form to be used in the building, it was inspired by an egg shown in Figure 1, and a half-egg form with a single-walled stability advantage was used due to its curvature in two directions. The structure, which has the feature of a half dome with a single-walled elliptical base, is designed to be 40m wide, 70m long and 20m high. The architectural authors of the project are İlkay İntaş and Hüseyin Akdeniz. 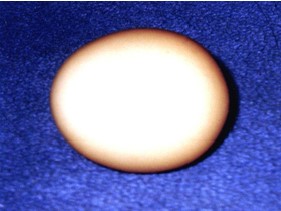 Figure 2: Inspiration of the Architectural Form Specially Designed for Birds. 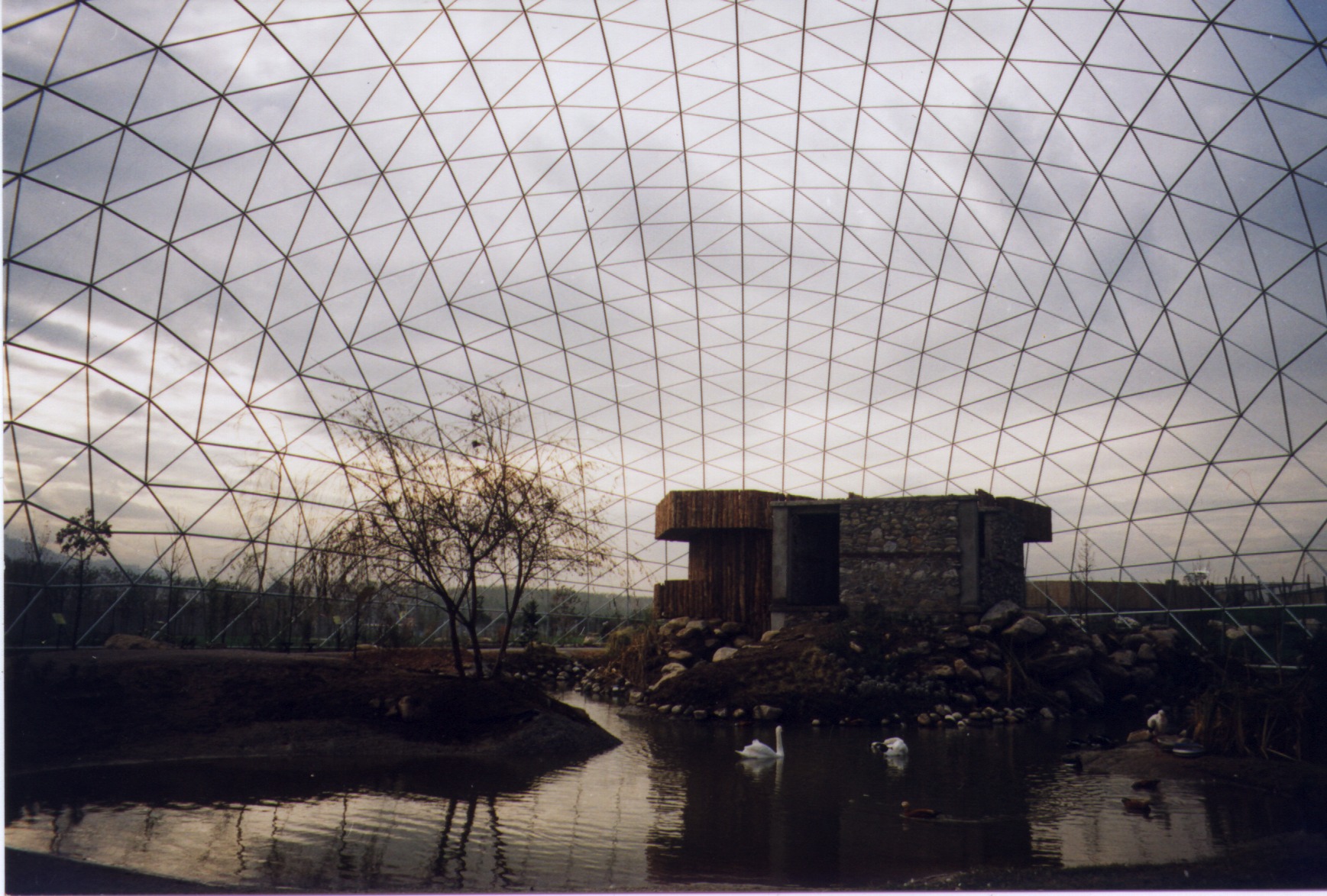 Figure 3: Inside View of the Waterfowl Cage 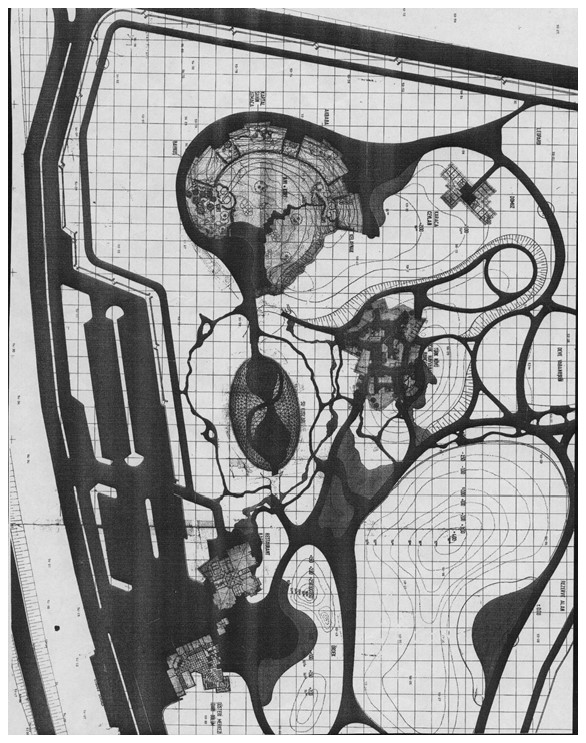 Figure 4 : General Layout of the Waterfowl Cage in the Zoo

Formex Algebra was used to create the half-egg-shaped form of the space cage system. For the form created using basi-diametic retronoms, a total of 9 lines of formulation was written with formex algebra. The number of modules obtained in the formulation was determined based on the minimum and maximum desired bar length range in the system. On the form created, the system formation was completed after the necessary evacuations were made in the entry and exit areas at both ends of the system. 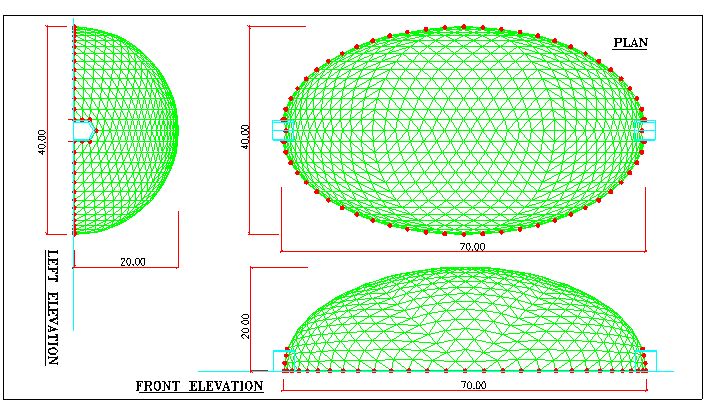 Figure 5: Plan, Appearance and Dimensions of the Space Frame System 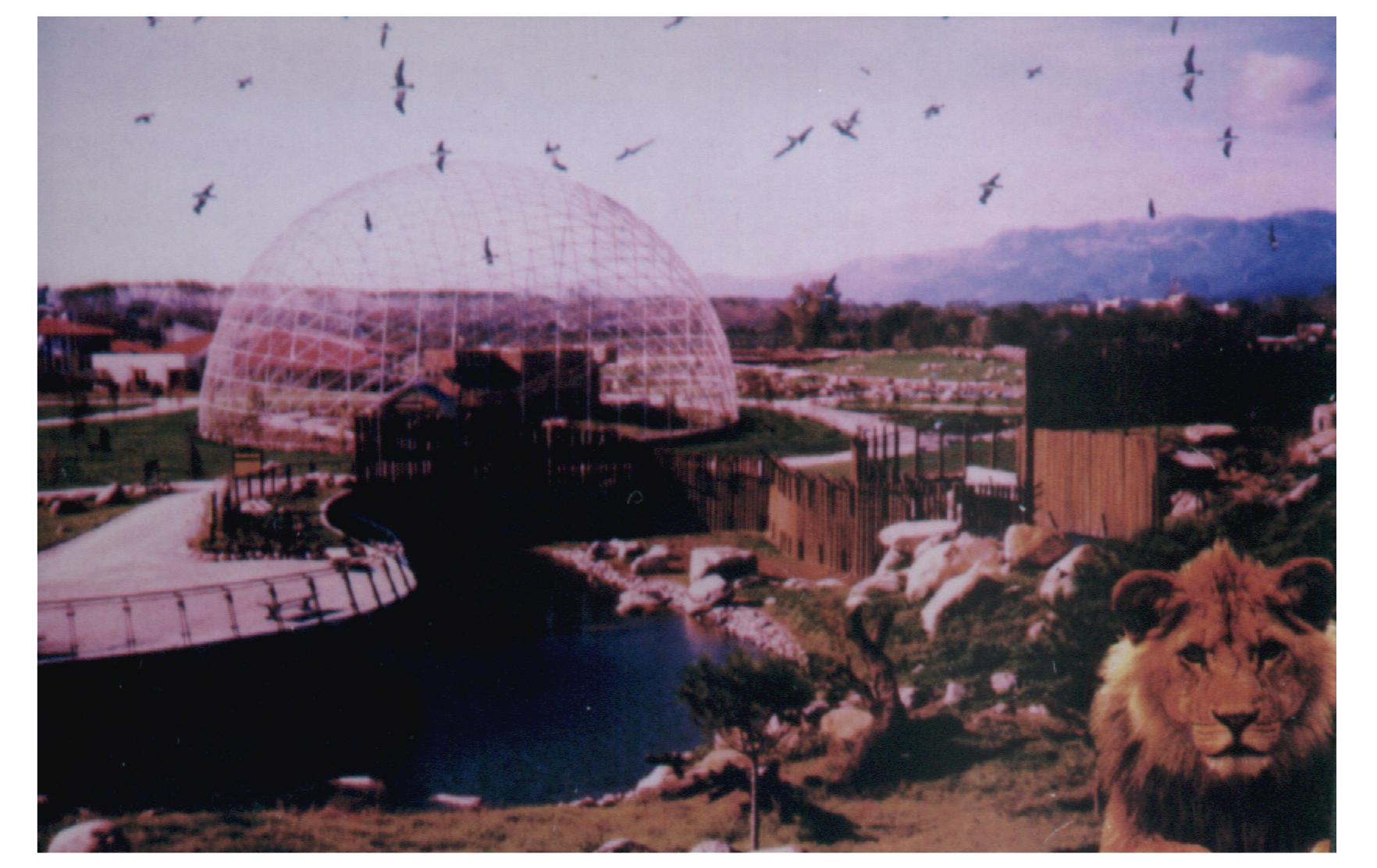 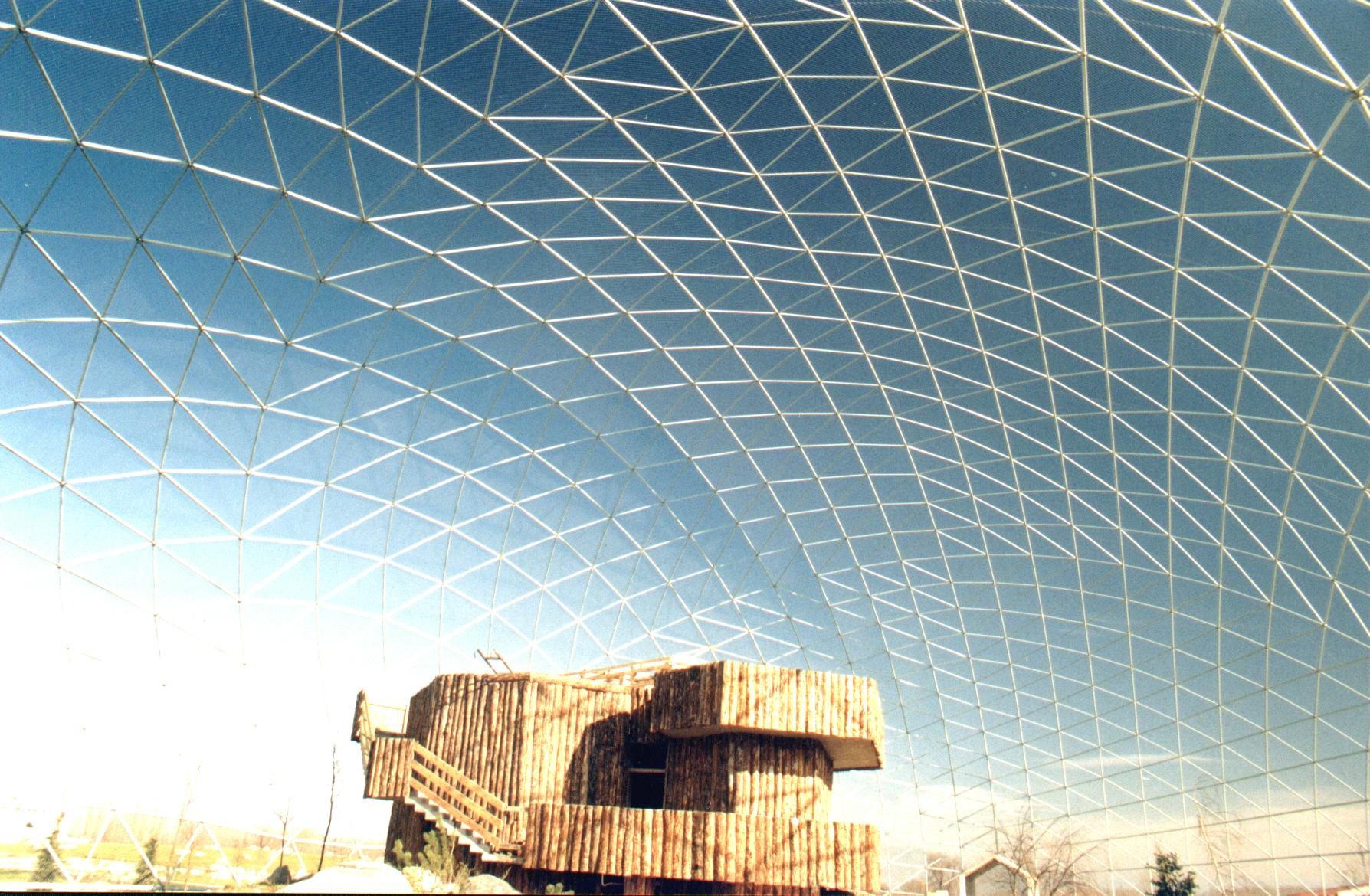 Figure 7: Inside View of the Cage and Modulation Obtained with Formex Algebra

All projecting, manufacturing and assembly works of the Waterfowl Cage were carried out by USKON Space System Constructions Industry and Trade Inc. Structural design and static calculations were made by Civil Engineer Tuncay Kaya. The Waterfowl Cage, designed as a single wall, is formed from a steel prefabricated space system with articulated nodes. The system, which has a width of 40 x 70 m and a height of 20 m at the maximum points; it is covered with a nylon net to prevent the birds from getting out, and there is no coating in the system apart from this permeable net. 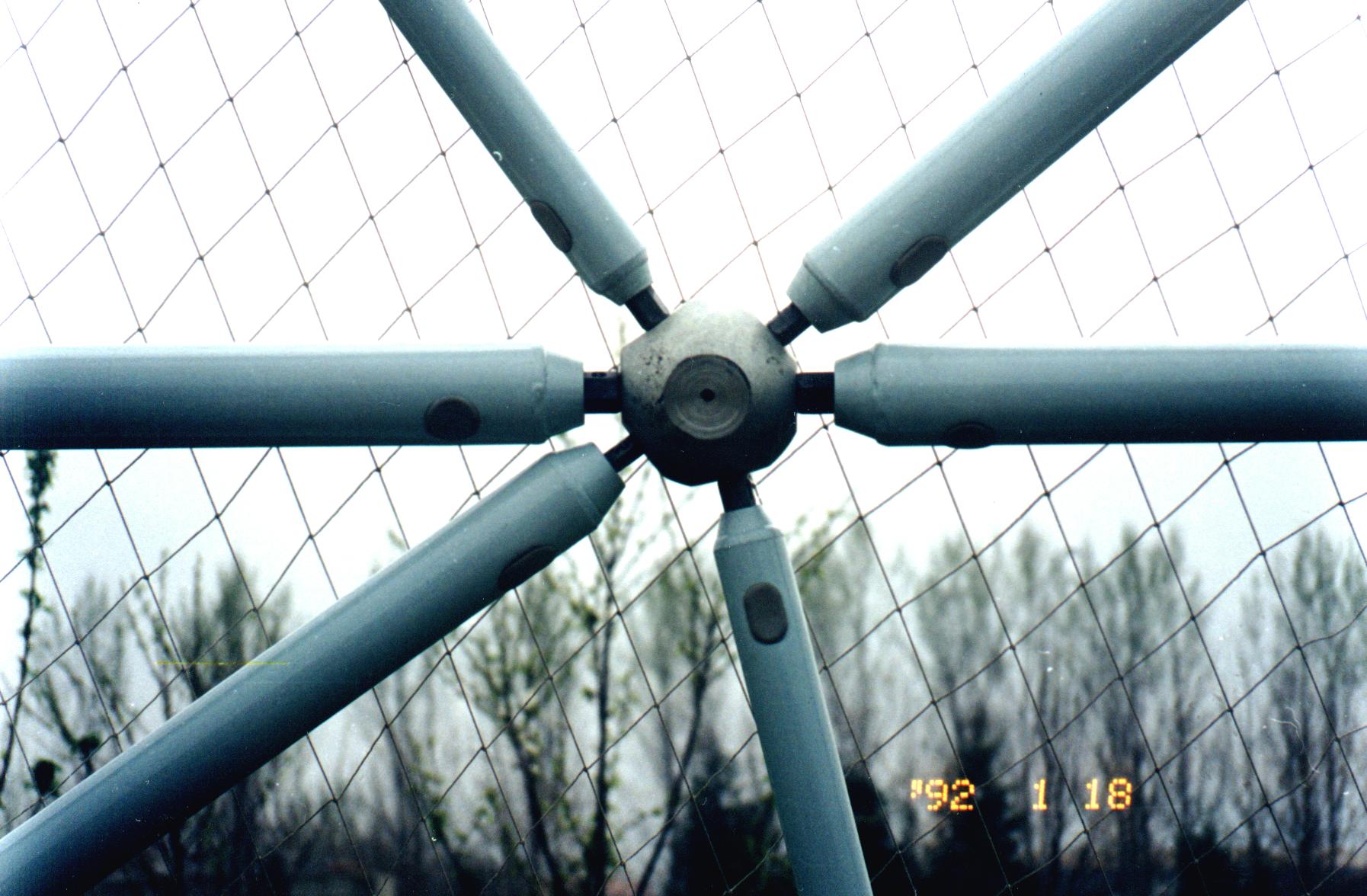 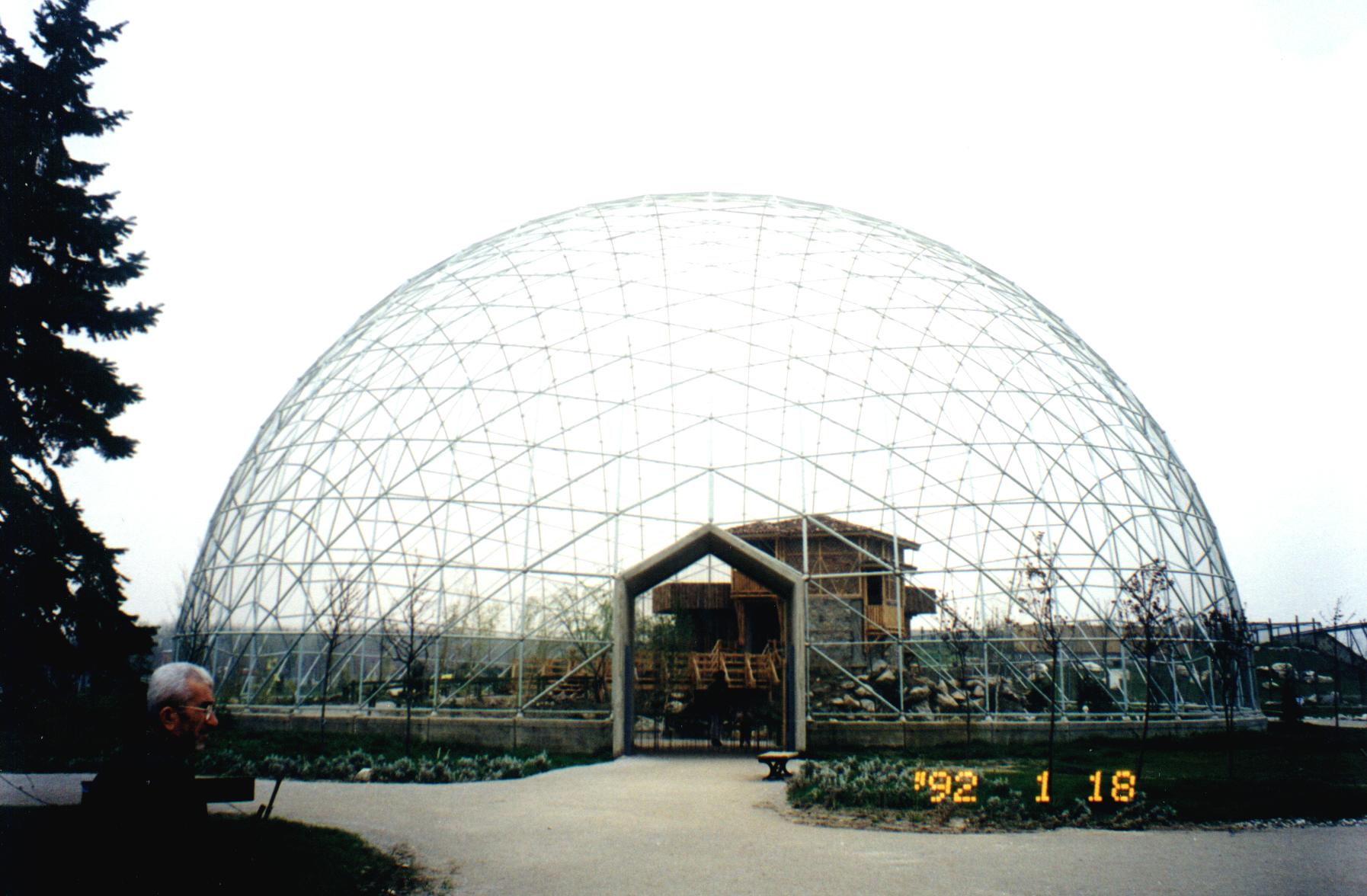 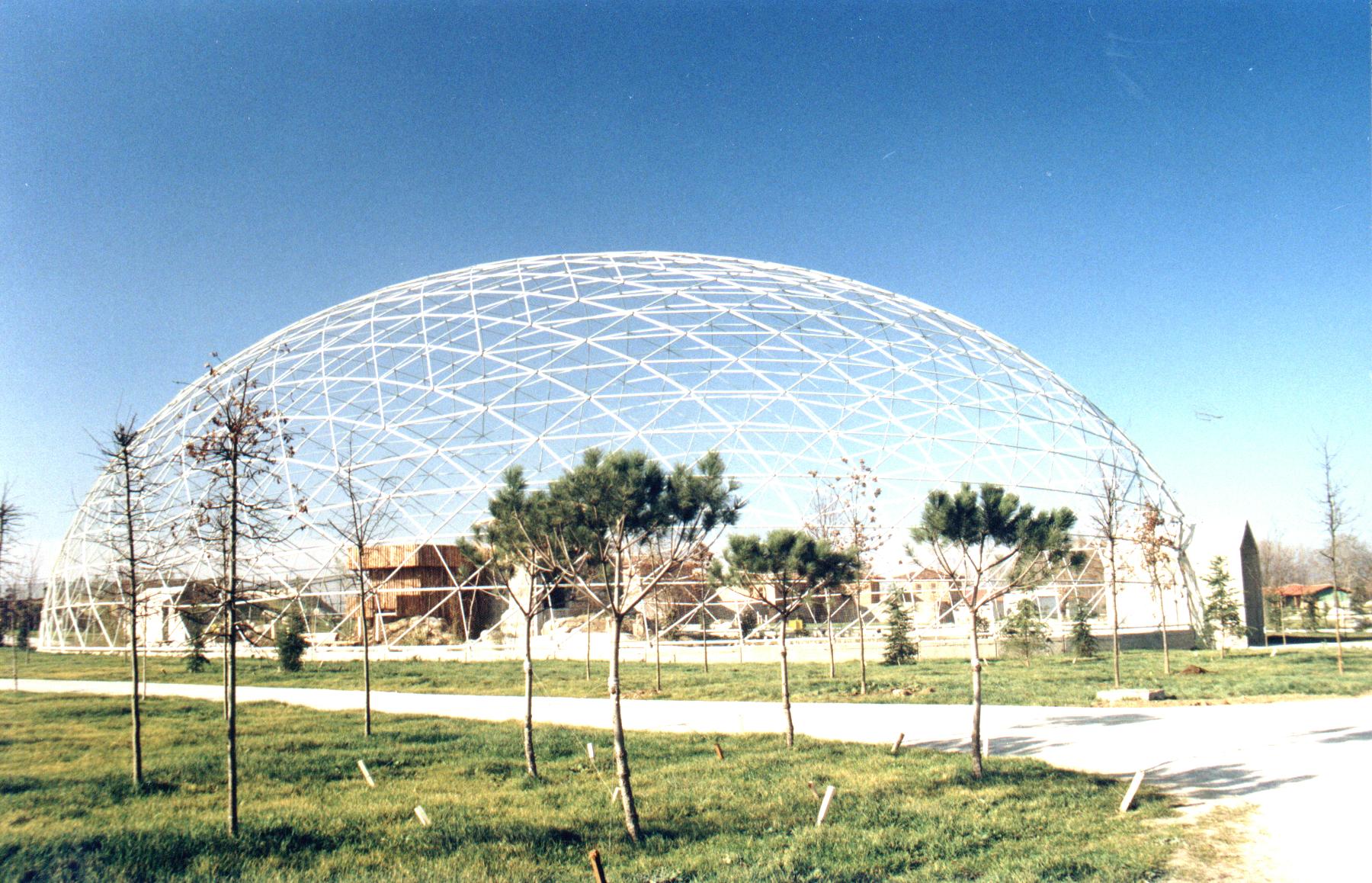 Figure 10: Side View of the Waterfowl Cage

The pipes forming the space frame system are made of St 37.2 and their lengths vary between 1,478 m and 4,735 m. There are 2029 pipes in in the system and their diameters vary between  42.4 mm and  139.7 mm. The diameters of the spheres made of C45 material started from 75 mm and spheres with a maximum diameter of 160 mm were used. The total number of nodes in the system is 700 and the number of structural bearing is 68.

In order to ensure stability as a single wall, every node on the base, including the input-output sections at both ends, is designed as a non-movable fixed bracket. A beam on which the bracket spheres are placed and a continuous foundation under it are designed in such a way that they can work in the form of a tension circle. 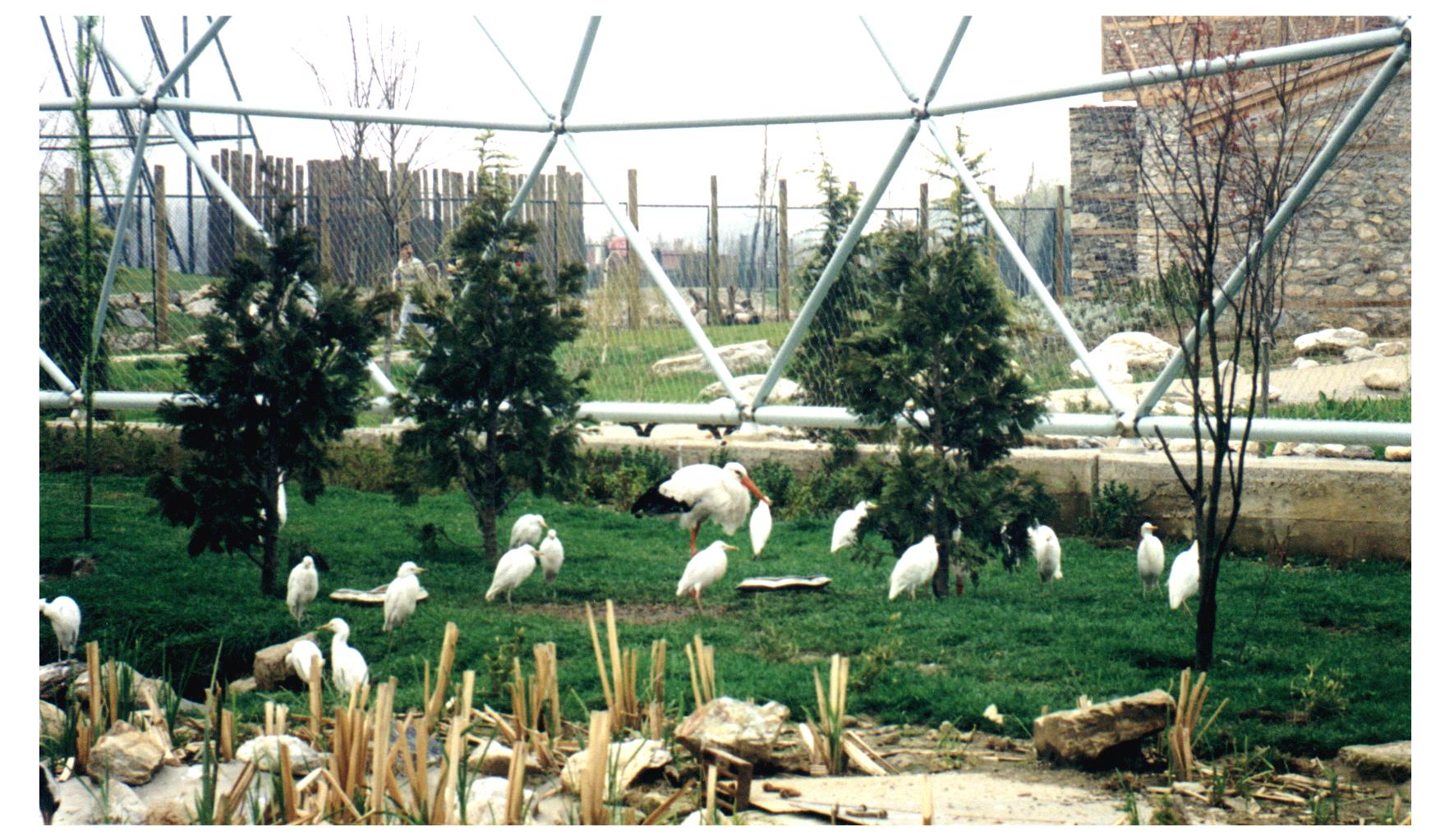 Figure 11: Inside View of the Complete Waterfowl Cage

External loads affecting the system; space self-weight, mesh cover, partial snow load, ice load on the elements, wind, and earthquake loads. In the system designed in computer aided design environment according to the matrix displacement method, the pipes are hot-dip galvanized and painted with electrostatic powder paint. Spheres, 10.9 quality high strength bolts and nuts are electro galvanized. Bolt diameters used are between M12 and M33. A maximum of 12.115 tons of tensile and 20,689 tons of pressure force comes to a pipe on the system.

The waterfowl cage space system construction assembly was completed within 30 days, despite the disadvantages of being single-walled and articulated at the nodes, since the system is completely prefabricated. During assembly, because all brackets are fixed and do not have mobility, the bracket spheres were placed in their places with a very sensitive application and the assembly continued until at least two module heights were completed all around by using the near-vertical characteristics of the first modules. After this stage, the construction was kept standing with the braces connected to the ground from the outside and the partial scaffolds inside, and the parts closer to the vertical were started to be closed inwards by raising them more, since the curvature was in every region. Although the assembly speed slows down in curvatures close to horizontal, the assembly works have been completed by using additional reinforcements in the gaps close to the circle in the middle. Then, the carrier construction was covered with nylon mesh and made ready for use. 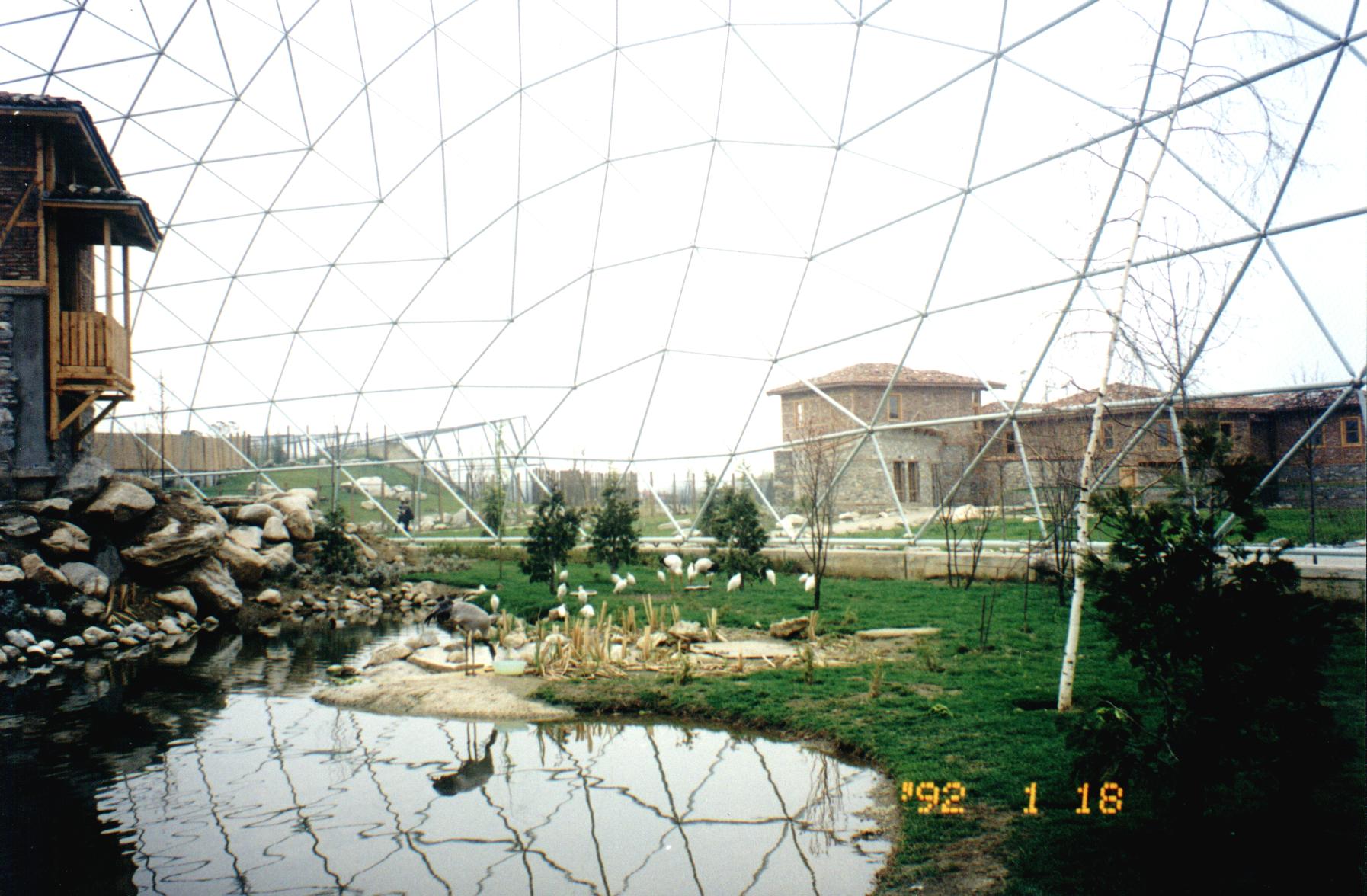 Figure 12: Inside View of the Complete Waterfowl Cage 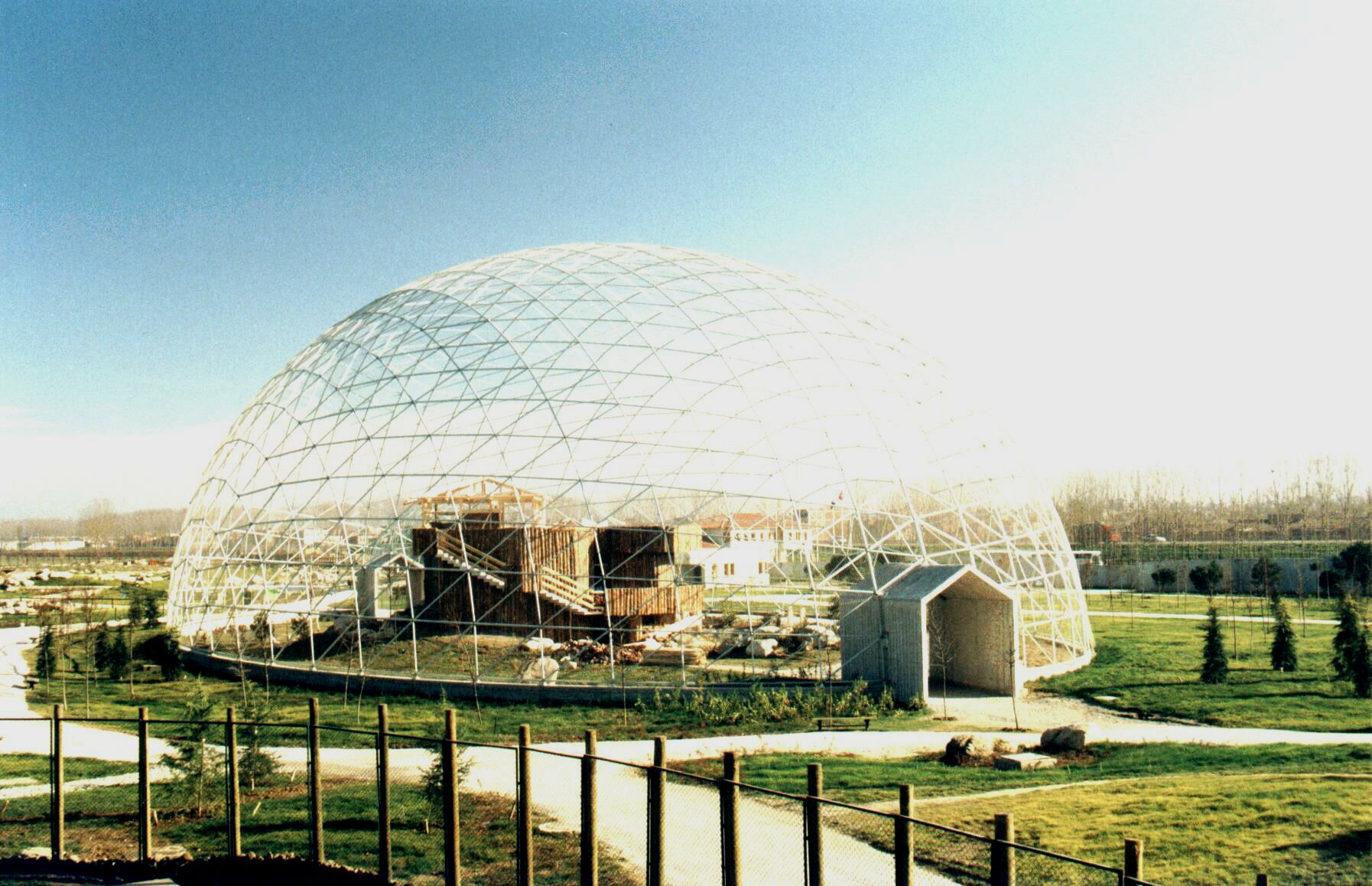 Figure 13: The Completed Exterior of the Waterfowl Cage

As Uskon, we also carry out the design, production and assembly of all kinds of steel structures that can be expressed geometrically as well as space frame systems.